Skiing on the Marmolada Glacer is an unforgettable experience. From Hotel Genzianella, with the Sky Bus Service, you can easily reach the lifts in Malga Ciapela and the always plenty of snow, perfect slopes for fantastic days. Chairlift of Padon that connects the slopes of Arabba. 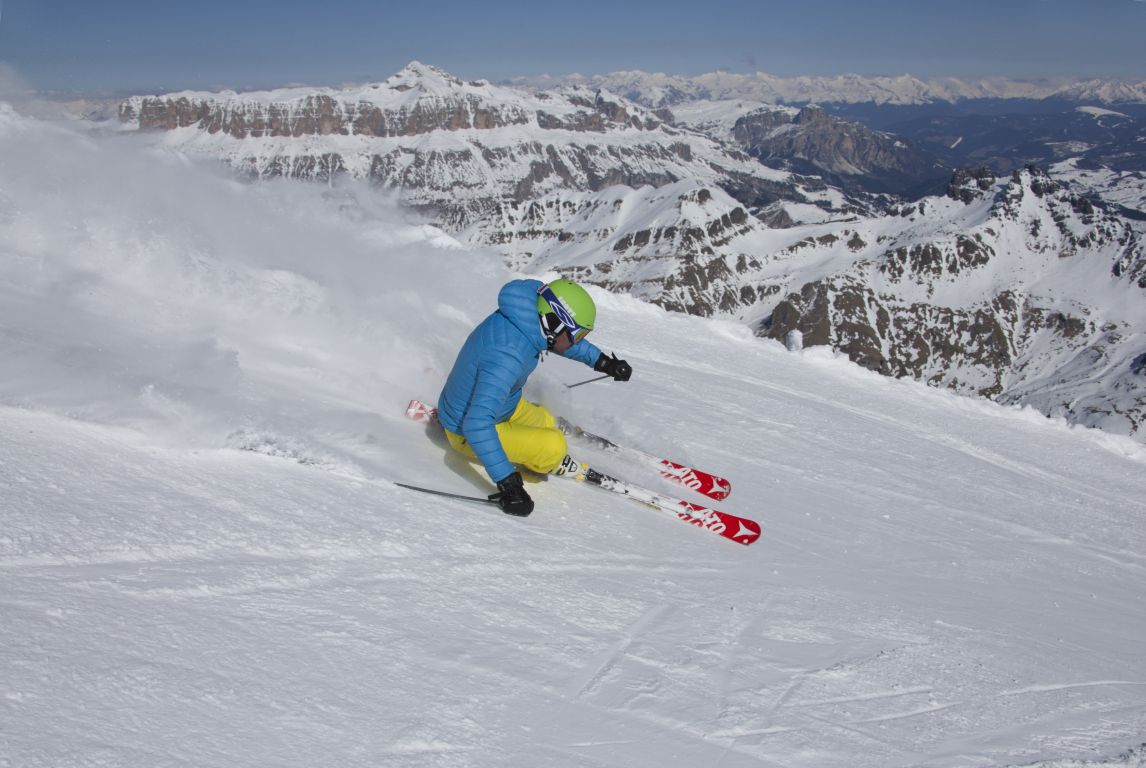 The Marmolada Ski Area is one of the highest tourist resorts in Italy and offers various skiing opportunities with the connection to the Arabba ski area.

For ski and snowboard enthusiasts, at 3,342 m a.s.l. guarantees perfectly snow-covered slopes from Dicember to April and becomes a paradise for those who practice off-piste and ski mountaineering. From Malga Ciapela the cable car starts with its 3 stations in Antermoja (2,350 m a.s.l.), Serauta (2,950 m a.s.l.) and Punta Rocca (3,265 m a.s.l.) where the spectacular La Bellunese ski run starts, which is the longest ski run in the Dolomites, with its 12 km.

The Sellaronda, also known as the Tour of the 4 Passes, is the itinerary that crosses the 4 passes (Pordoi, Sella, Gardena, Campolongo) around the Sella Group. It is one of the most famous ski tours in the Dolomites and thanks to the organisation of the lifts, you can go in both directions. Starting from the Hotel, in half an hour you reach Arabba and, starting the first climb by 9.00 am, ends at the end of the day.

The circuit is also accessible by mountain bike in summer, while the road route, which passes through the towns of Arabba, Valgardena, Corvara for a distance of 55 km make it very popular among cyclists. 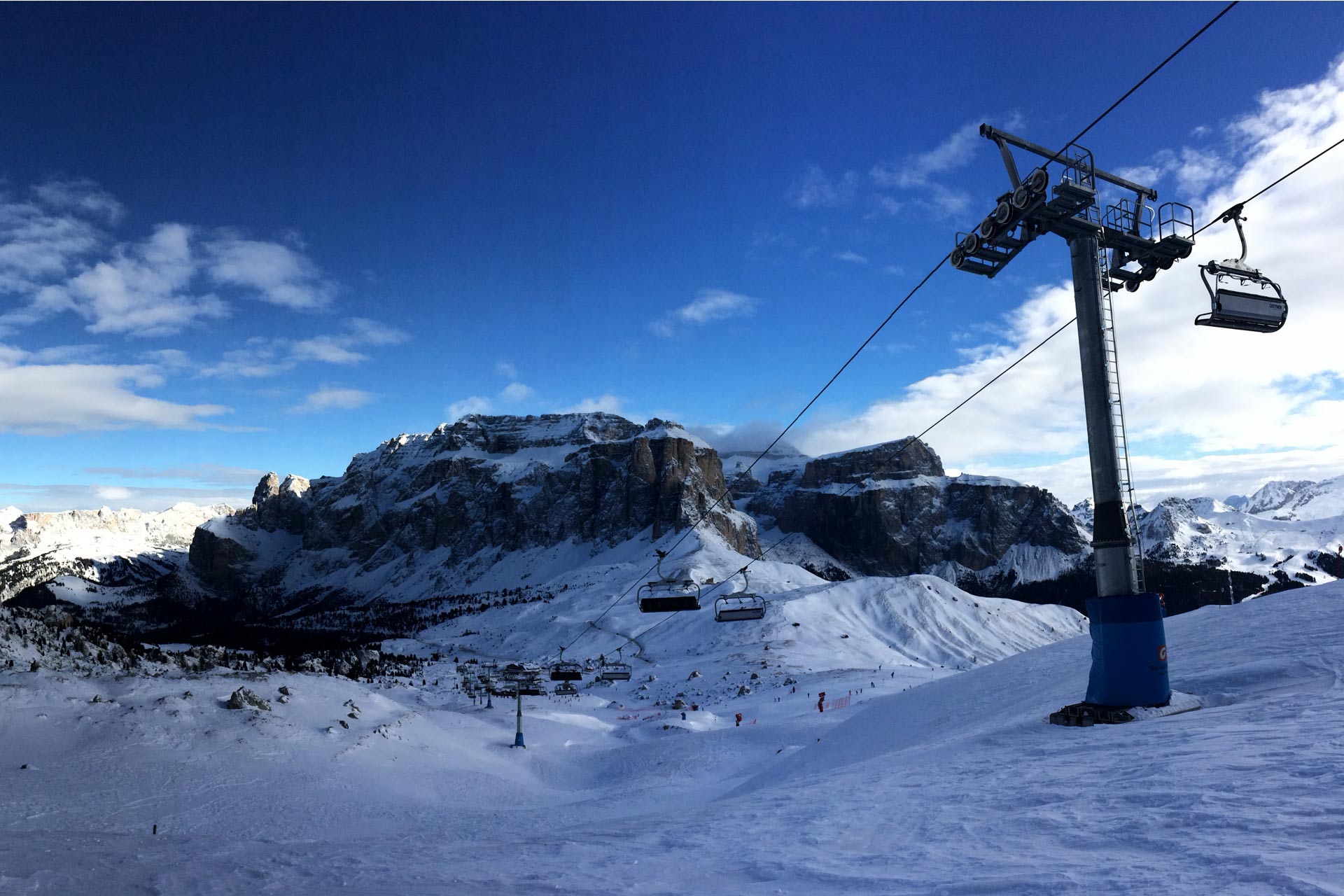 Tour of the Great War

Crossing the most beautiful mountains of the Dolomites

Among the attractions not to be missed with skis on your feet the Tour of the Great War is definitely the one to include among the things to do. A highly appreciated itinerary that, through the most beautiful mountains of the Dolomites such as Marmolada, Civetta, Pelmo, Tofane, Lagazuoi,  Cinque Torri, Cime di Fanes and the Sella Group, retraces the Great War Historical Sites. The heart of the tour and the mountain symbol of the war in these places is the Col di Lana.

The dificoulty of the slopes if low and can be taken on even by less experienced skiers. Some optional slopes of greater difficulty can be descended, such as La Bellunese on the 12 km Marmolada which makes it the longest track in the Dolomites.

For cross-country skiers, the Marmolada offers a 7.5 km circuit, between 1,465 and 1,575 m a.s.l. divided into three rings each of 2.5 km and with different difficulties where beginners or experienced skiers can practice this sport. For those who are taking their first steps, a well-equipped School Camp offers the possibility of learning with the assistance of ski instructors. The stretch in the woods between conifers and bridges is very suggestive, making it a particular feature. On all the courses you can practice both the Free and the Classic technique. 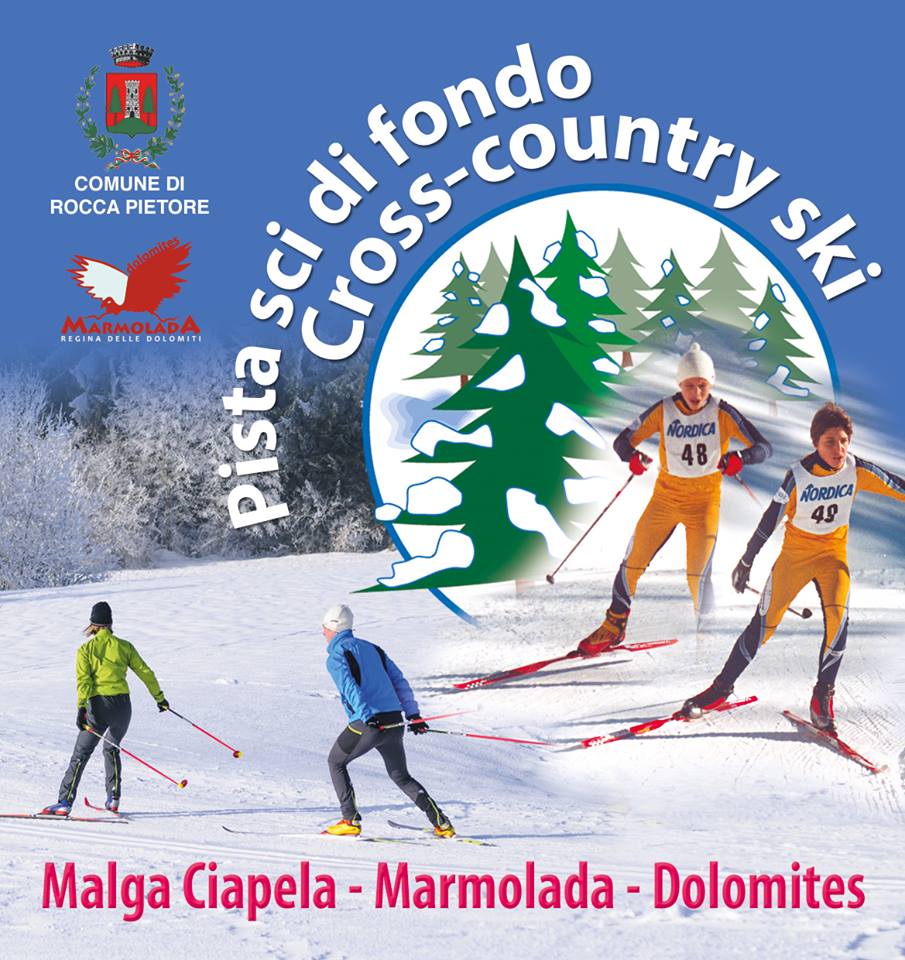 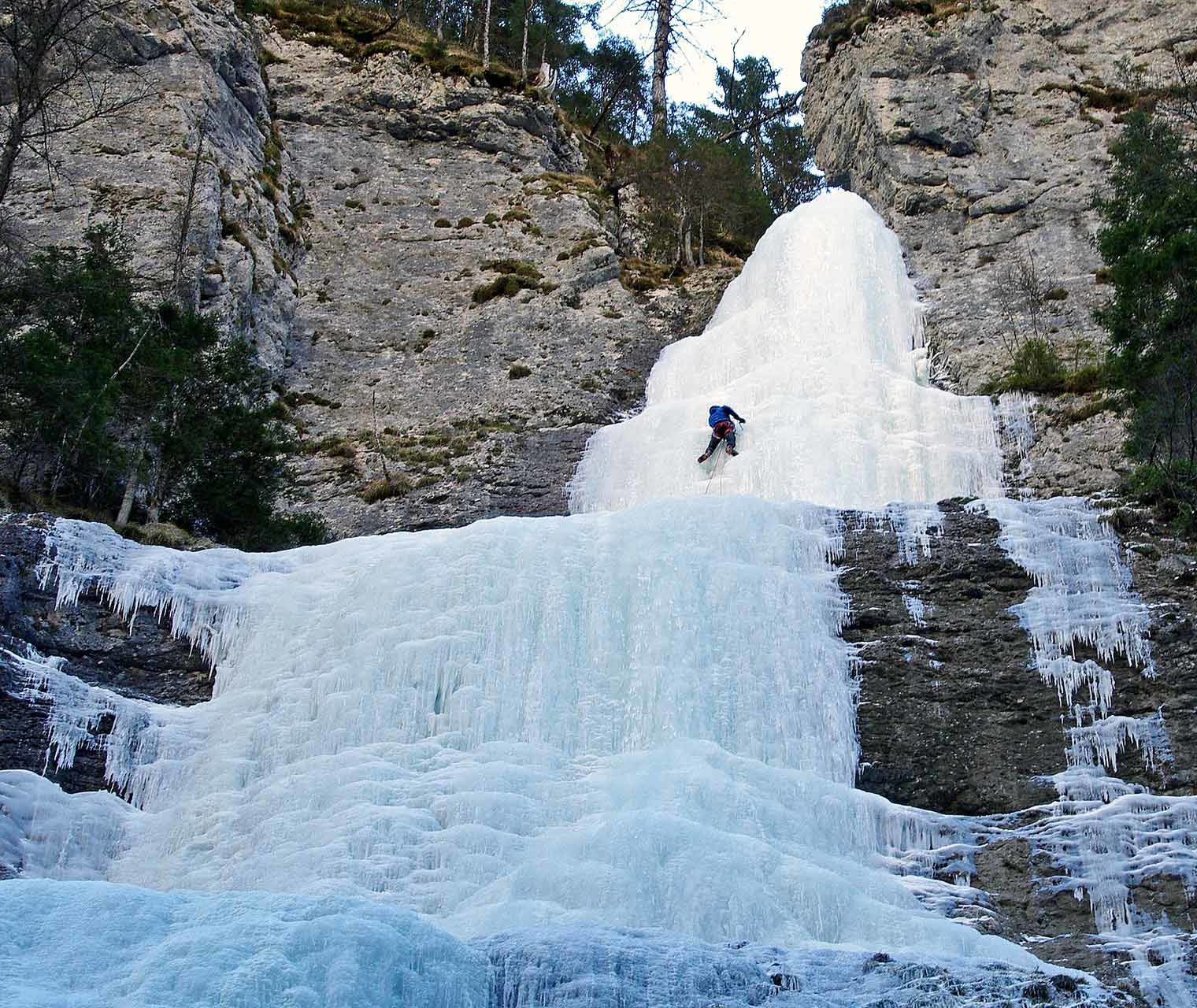 The Ice Falls of the Serrai di Sottoguda are very appreciated by fans of Ice Climbing. Along the way you can watch the fascinating sport as a spectator. The abundance of waterfalls makes this area very interesting for a sporty approach to Vertical Ice. There are different routes that are formed in winter with difficulties ranging from the 2nd to the 5th degree, with many medium-high climbs that can meet the different needs of climbers. The most classic, to name a few, are: the Sun Waterfall, the Waterfall of the Crossings, the Central Cathedral , the right Cathedral and the Left Cathedral, the Excalibur, The Sword in the Stone, this one of the most challenging.

This is the old route that, with its 2,200 metres in length, leads from Sottoguda to Malga Ciapela (now replaced by the convenient variant of the SP 641) crossing the charming canyon, the so-called Serrai di Sottoguda, where the Pettorina torrent flows, hence the name Val Pettorina. The road is closed to traffic and lends itself to various sports and recreational activities such as night events illuminated by torchlight and events of the traditions of the valley.

Along the Serrai you can take simple walks to enjoy your free time in the enchanting atmosphere that creates this narrow gorge, or practice sports such as ice climbing or walk along them equipped with snowshoes or skis. 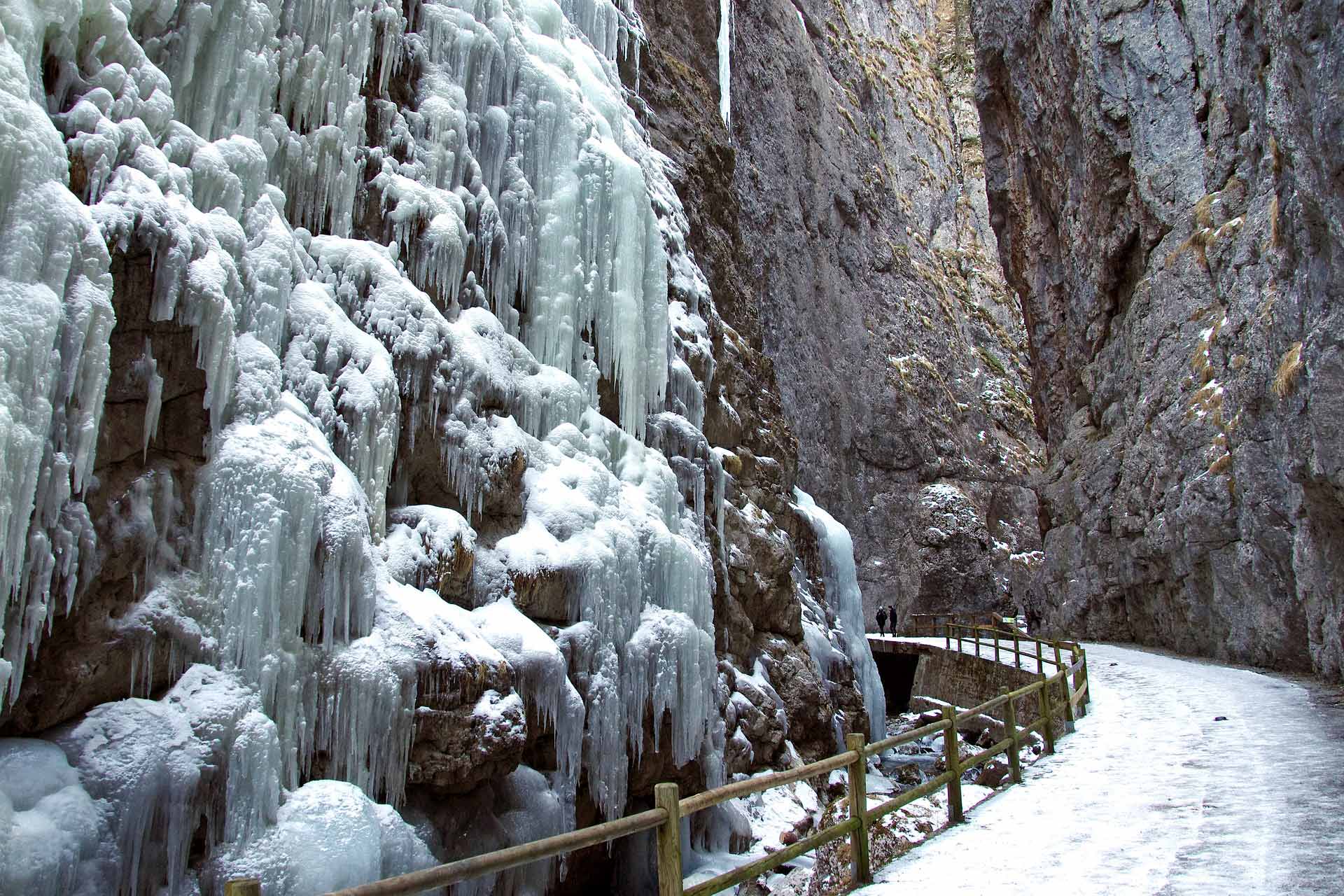 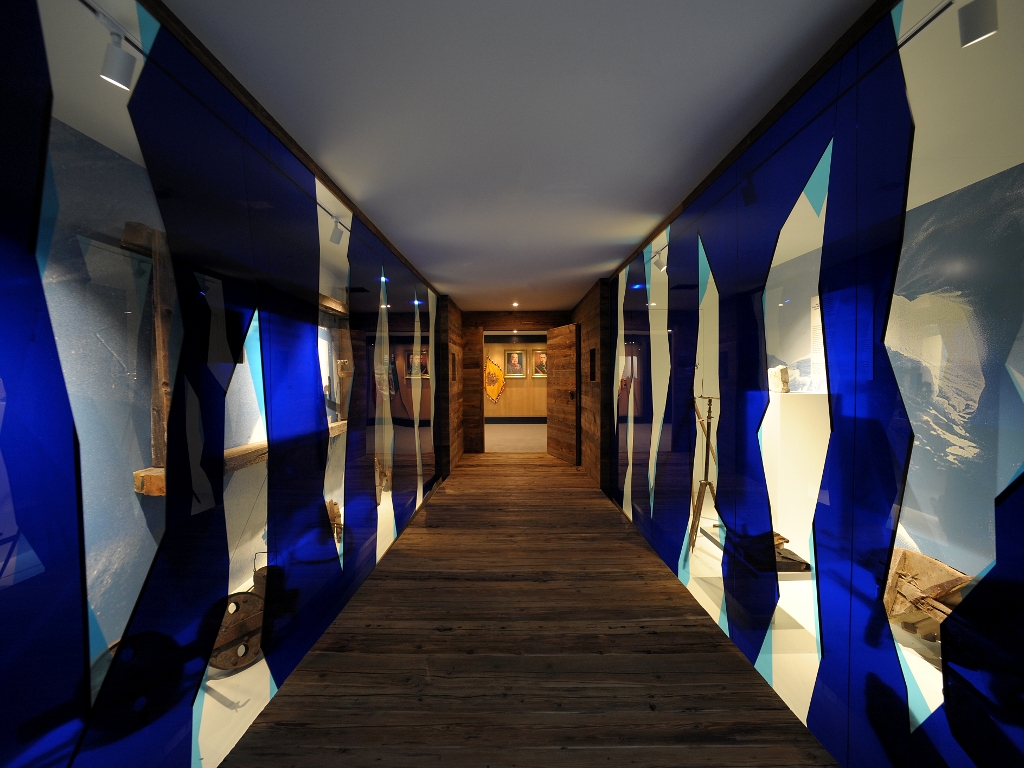 Museum of the Great War

The Great War Museum at an altitude of 3,000 meters

The museum is located at an altitude of 3,000 meters. and traces the various themes of war in the mountains in a path of 2 parallel tunnels.

The “Eisstadt” [City of Ice] was carved into the glacier among the crevasses and consisted of some 10 km tunnels linking the caves in which were positioned the various wooden huts used as accomodaion, magazines, infirmaries, bar, etc…
The so-called “Eisstadt” was a large barracks, home of three hundred Kaiserschützen (Austrian riflemen), with various services, magazines and shelters.

Go to the site: www.museomarmoladagrandeguerra.com